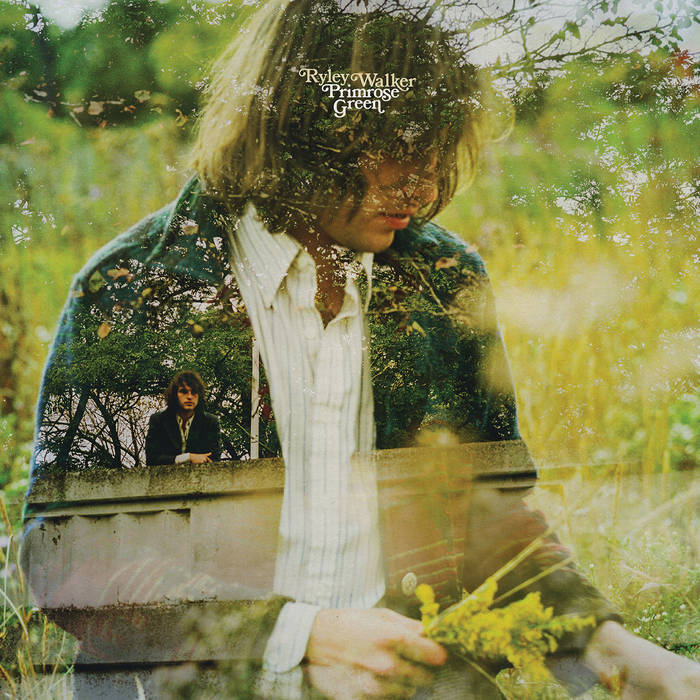 StrangeFlow I'd love to select "love can be cruel" as my favorite track but the whole album kicks ass so I guess it doesn't matter :) Favorite track: Sweet Satisfaction.

J. Danner I heard this on a local radio station a couple of times and assumed it was some old Tim Buckley track I'd never heard. Wrong! What a great find. Reminds me not only of Buckley but also Jason Molina, RIP. Favorite track: Primrose Green.

Daniel Wojahn An astounding musical talent and intriguing arrangements with a wonderful production! I am in love with the Summer Dress this album spreads over my ears! *****

Ryley Walker is the reincarnation of the true American guitar player. That’s as much a testament to his roving, rambling ways, or the fact that his Guild D-35 guitar has endured a few stints in the pawnshop. Swap out rural juke joints for rotted DIY spaces and the archetype is solidly intact. His personal life might be tumultuous and his residential status in question, but his bedrock is disciplined daily rehearsal and an inexhaustible wellspring of songcraft.

Raised on the banks of the ol’ Rock River in northern Illinois, Ryley’s early life doesn’t give us much more than Midwestern mundanity to speak of. Things start to pick up for young Walker when he moves to Chicago in 2007 and briefly attempts a collegiate lifestyle as he storms the always fecund local noise scene with his Jasmine-brand electric guitar; just a cheap knock-off from which he could coax unearthly sound hallucinations. A few years of wasted finger-bleeding basement shows variably under the names Heatdeath and Wyoming (with requisite cassette-only releases) firmly established his name locally, if not always positively.

Ryley transitioned slowly into the finger-style artist we know today in 2008 and 2009, still opening for synth nerds in basement venues, but growing by leaps and bounds in virtuosity. He perfunctorily maintained day jobs with frequently amusing results, famously getting fired from Jimmy John’s for practicing in the walk-in freezer. By 2011, at age 21, he finally began issuing recordings from his already impressive catalog of compositions. 'Evidence of Things Unseen' and 'Of Deathly Premonitions' (with Daniel Bachman) appeared briefly as limited cassette releases. Both efforts were impressive displays of fingerpicking prowess though not fully elaborated documents.

It was a 2012 bike accident that set Ryley on his current path. He quit his day job to recuperate but instead of returning to the grind he duked it out on the rock club circuit. Practice became more diligent; he began lacquering his fingertips at cheap salons, permanently giving his playing aggression and tone difficult to achieve with naked fingertips or finger picks. Though seen as part of the fraternity of young guitar masters like William Tyler and Daniel Bachman, his voice defied that stereotype. He was finding a new path refracting the British traditional spectrum, from Bert Jansch to Nick Drake, and defying all the limitations of the genre. His 2013 recordings, that resulted in The West Wind EP and All Kinds of You LP, fully express these Anglophilic tendencies to the point of nearly exhausting their possibilities.

This brings us to the present. The board was barely reset from the All Kinds of You sessions before Ryley was corralling his by-then-rejiggered band back into Minbal studios in Chicago to solidify a totally new direction in his creative vision. Primrose Green couldn’t be restrained. It begins near where All Kinds of You leaves off but quickly pushes far afield. The title sounds pastoral and quaint, but the titular green has dark hallucinogenic qualities, as does much of the LP.

The band is a mixture of new and old Chicago talent, blending both jaded veterans of the post-rock and jazz mini-circuits together with a few eager, open-eared youths. Fred Lonberg-Holm, cellist, is as of now a member of Chicago’s old guard of jazz musicians, having played numerously alongside luminaries Peter Brotzmann and Joe McPhee, to name just two lines on a very long list. Frank Rosaly, drums, is approaching the same longevity and padded resume, managing long stints with Josh Abrams, David Boykins, and Doug McCombs. Jason Adasiewicz, vibraphone, gigs with Exploding Star Orchestra and Jagjaguwar alums Manishevitz and anyone else in town who needs vibes. Anton Hatwich, double bass, has been playing live with Ryley’s band for almost a year now, while still holding it down with various trios and quartets. (It’s worth stating at this point that this is not a jazz record. Chicago has blurred these lines since forever.)

The core of Ryley’s band continues to be Brian Sulpizio, guitar, and Ben Boye, piano or harmonium. The telepathic intuition between them took root with their Health & Beauty project under which they’ve issued a handful of cassettes, particularly Chicago’s best kept secret masterpiece from the ‘teens, Guns. Ben Boye is perhaps best known as a member of The Cairo Gang, Bonnie “Prince” Billy’s recording and touring band for a few years (before he retreated to personal and spiritual isolation in New Mexico). Today he shares his time as well with Joshua Abrams’ expansive ensemble Natural Information Society. Brian spends his non-guitar playing time as a recording engineer, including the final stereo mix heard on this very record, or in a liminal state beyond consciousness.

Last but certainly not least amongst the musicians is Whitney Johnson on viola and intermittent background vocals. Besides being the go-to violist in the tri-state-area, she also plays with the experimental quintet Verma (Trouble In Mind) and helms her own even-more-experimental solo project, the fragiley beautiful Matchess (also on Trouble in Mind). Cooper Crain, recording engineer and de facto producer, is known as member of contemporary Krautrock act Cave (Drag City) and founder of new age secularists Bitchin’ Bajas who have risen to the top of the synth-drone mountain with their last few Drag City releases. Though his musicianship isn’t heard here, his undefined creative energies are uncontainable and splashed across this LP.

Ryley didn’t have much time to write this LP, so some of it he didn’t… bits of lyrics were improvised into full-blown songs in the studio on the fly more often than not. However, the ratty bits of handwritten words that make up the balance of the record were largely pieced together while on an ill-fated 2013 tour with Irish guitar whiz Cian Nugent. The title track “Primrose Green” was nearly discarded after its incarnation on a bleak St. Patrick’s Day spent in Oxford, Mississippi. “Primrose Green” is a colloquial term for a cocktail of whiskey and morning glory seeds that has a murky, dreamy, absinthian quality when imbibed, and a spirit-crushing aftereffect the morning after. It is the moment before departure from Ryley’s All Kinds Of You mindstate. “Summer Dress” is liftoff… seizing the mantle from Tim Buckley’s Starsailor and perfecting its frantic jazz-induced fits. It was written in a dressing room in upstate New York, but perfected in rehearsal, veering between a six and ten minute epic. Contained here is the flawless conclusion, but reference the live set to experience the full possibilities of this anarchic work.

A forgotten roadside hotel in Tennessee yielded one song, “Same Minds”, with just a hint of self-loathing. It was kicked around in rehearsal until taking its shape as a drifting bit of dreamy jazz. A 5-day stretch in Austin, mostly staying on Lechuguillas’ Jason Camacho’s tile floor with no blanket in a room barely large enough for one yielded most of the rest of the lyrics. “Griffiths Bucks Blues” was almost jettisoned but a thumbs-up from Jason kept it in the repertoire. Griffith Buck was a local artist and eccentric botanist in Ryley’s hometown of Rockford, Illinois who has likely had few other songs named for him. “Love Can Be Cruel” spends almost two minutes “out” before becoming the song it was originally intended to be. Drummer Frank Rosaly pushes the song further and further until it borders on a cathartic meltdown to close out Side A.

Side B sets off with a shot of Americana, “On The Banks Of The Old Kishwaukee”. It’s an ode to the immersion baptisms Ryley’s witnessed while walking along the banks. Unlike the idyllic memories of christenings under the weeping willows while a crowd looks on happily in their Sunday’s best at the healthy young catechumens; the river was brown and polluted and the participants dirty and tired and disinterested. “Sweet Satisfaction” presents some of Ryley’s most intricate and ecstatic fingerpicking. It’s hard not to recall John Martyn’s early 1970s work, though Ben Boye’s piano work is particularly revelatory here. “The High Road” was written while the trio of Ben, Ryley, and Brian Sulpizio (guitar) were on tour, opening for Cloud Nothings. Stuck crashing in a busted, unheated old house in New Orleans Ben sunk into a depression, Brian drank and Ryley drank, but also managed to turn out this ode to the rambling life.

“All Kinds Of You” is the oldest song included here. The title should seem familiar… it was written after his first LP, All Kinds of You, was finished, but the name seemed to fit that collection of songs better than anything else. By now, the song has seen many transformations and now sits more comfortably amongst Primrose Green’s cosmic transmissions. Lyrically, it copes with Ryley’s roadworn identity crises, the need to be so many people in so many cities, trying to fit in however possible in different hemispheres or different languages. Side B closes with a bit of tossback: “Hide In The Roses”, the only solo jam included herein. Cooper Crain (Cave, Bitchin’ Bajas), de-facto producer of the record, encouraged Ryley to use the extra studio time to bang something out, and this brilliant piece of Anglophilia emerged as the album’s closer.

No one knows what the future holds for young Ryley Walker. Hardship and setbacks and dilapidated housing only seem to spur him on creatively. Here, with this record, we risk limiting his access to personal disaster by flirting with success. A short lifetime of interminable practice and discipline have resulted in a masterpiece of an album, an album of a sort we haven’t seen since the 1970s. If the world catches on, the Ryley that follows up this album may be a different sort of person, one who knows the taste of better liquor and comfortable bedding and isn’t nearly as driven. I think he will be just as visionary, though less hungry, but either way... this is the time to get on the Ryley Walker bandwagon.